On New Years Eve, 12 Castle members joined 15 members of the Glasgow Glenmore Club and 3 members of the Perth Mountaineering Club at Denton House in Keswick for a joint meet. We soon got to know each other over a communal meal where we sat with different people for each course and most joined in with the Scottish dancing which led us up to the New Year which we celebrated in traditional Scottish style.

We woke on New Years Day to a clear sky and a sprinkling of snow on the high hills. As a result many people were tempted to ascend Skiddaw. This was done by various parties on varying routes but conditions high up were not pleasant – very strong winds and icy under foot. Most people were not equipped for the conditions! Only two Castle members made it to the summit, the rest retreating at various points including the start of the summit ridge and Skiddaw Little Man. Two members took in Latrigg as a consolation on the way down. However it was a good mountain day with excellent views of the surrounding hills and waterlogged fields and a very muddy looking Bassenthwaite Lake. Other members choose to climb Latrigg and run up High Seat.

2 January – the cloud was down on the summits but the weather was better than forecast and we did see the sun and some blue sky in between the showers. Some members went home after shopping and lunching but most choose to walk from the hostel and had another good mountain day. We ascended Walla Crag and had excellent views down over Keswick and Derwent Water. We then went on to Bleaberry Fell and High Seat before descending steeply to Ashness Bridge and the shores of Derwent Water. The Lake was higher than usual but we made our way back along the lakeshore and roadside footpath and reached the hostel just as it was getting dark. Two other members had a stroll up Catbells, Maiden Moor and High Spy.

3 January – another overcast day with heavy rain forecast by midday. Most packed up and made for home. Two members choose to drive up Borrowdale to Rosthwaite and did a short walk up Castle Crag, down the track towards Grange and back along the riverside path to Rosthwaite. Unfortunately the heavy rain came before the walk was finished but a very pleasant round was enjoyed.

An excellent long weekend. Thanks to the Glenmore Club for organising it, especially Caroline, and thanks to Chris Huxham and Dave Crowther for inviting us to join the Glenmore Club for their New Year meet and celebrations. (Chris and Dave are members of both the Castle and Glenmore clubs). It was lovely to meet new friends and enjoy the hills with them.

A report from the Glenmore Club is below the photos 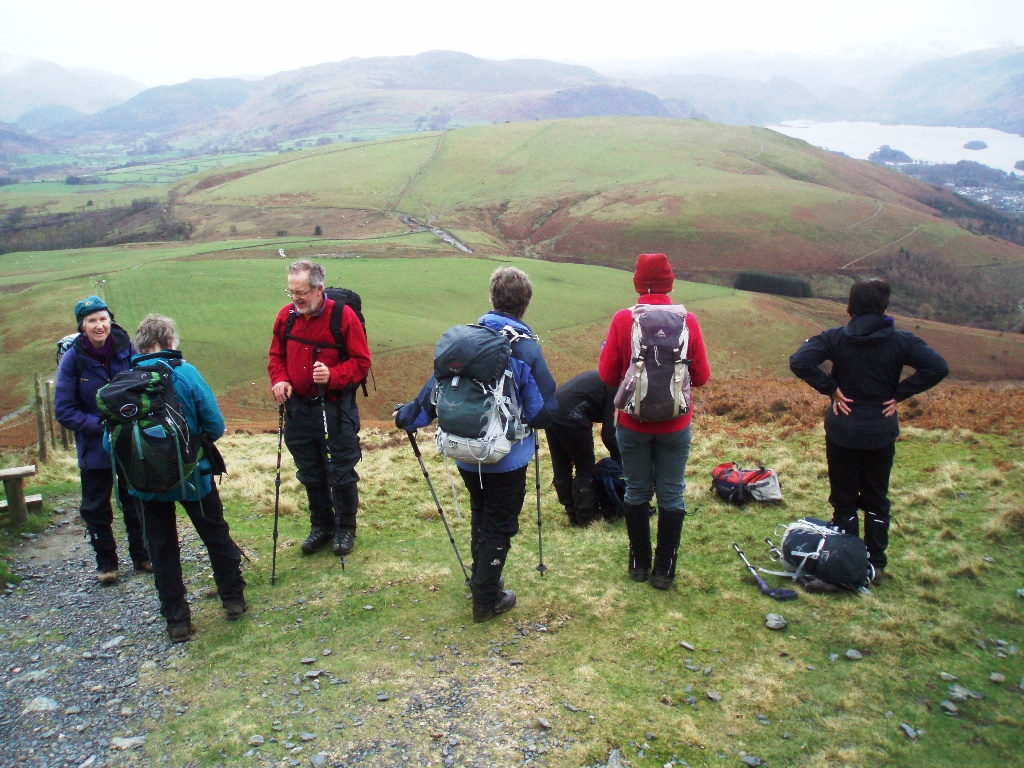 On the way up Skiddaw 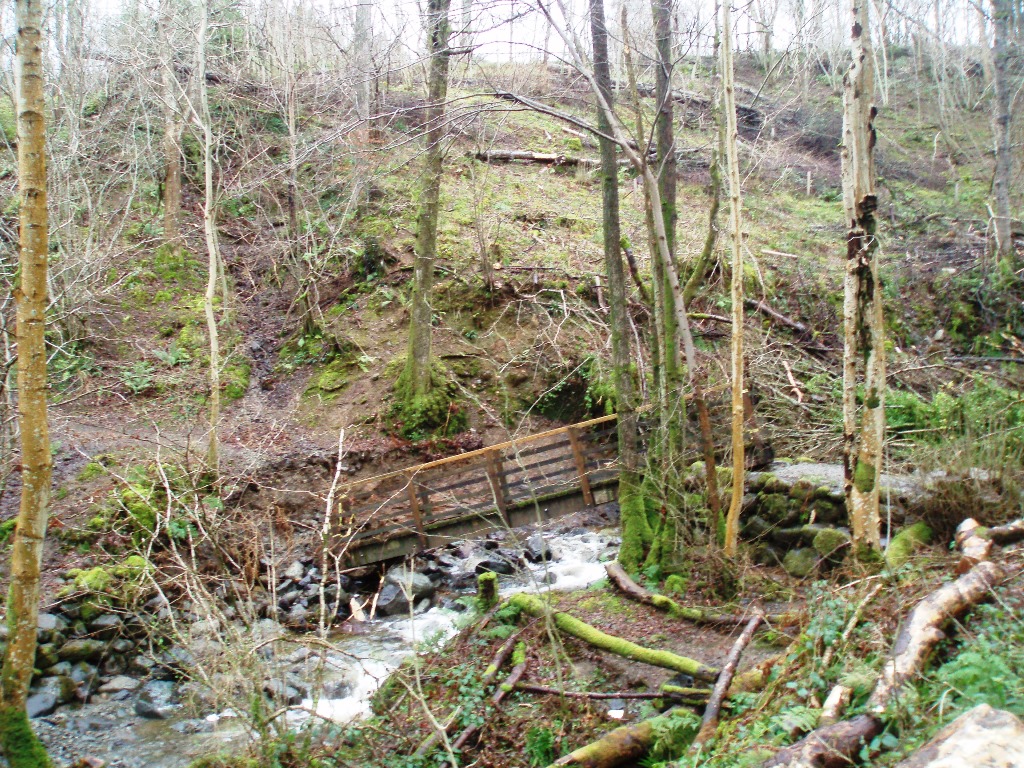 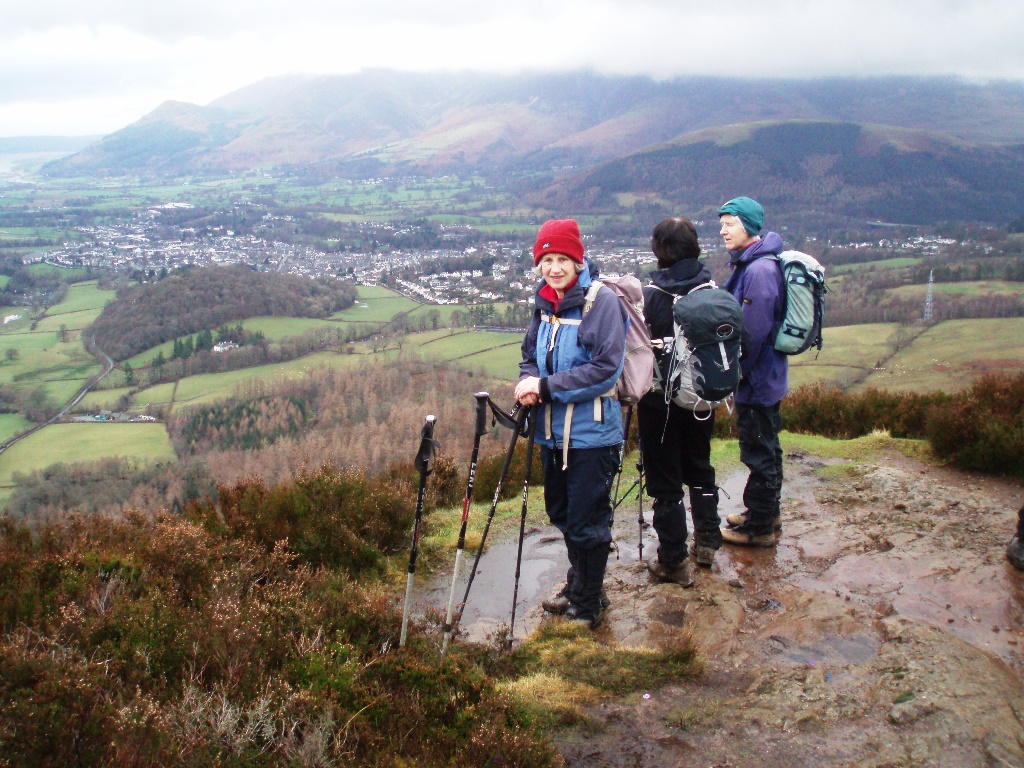 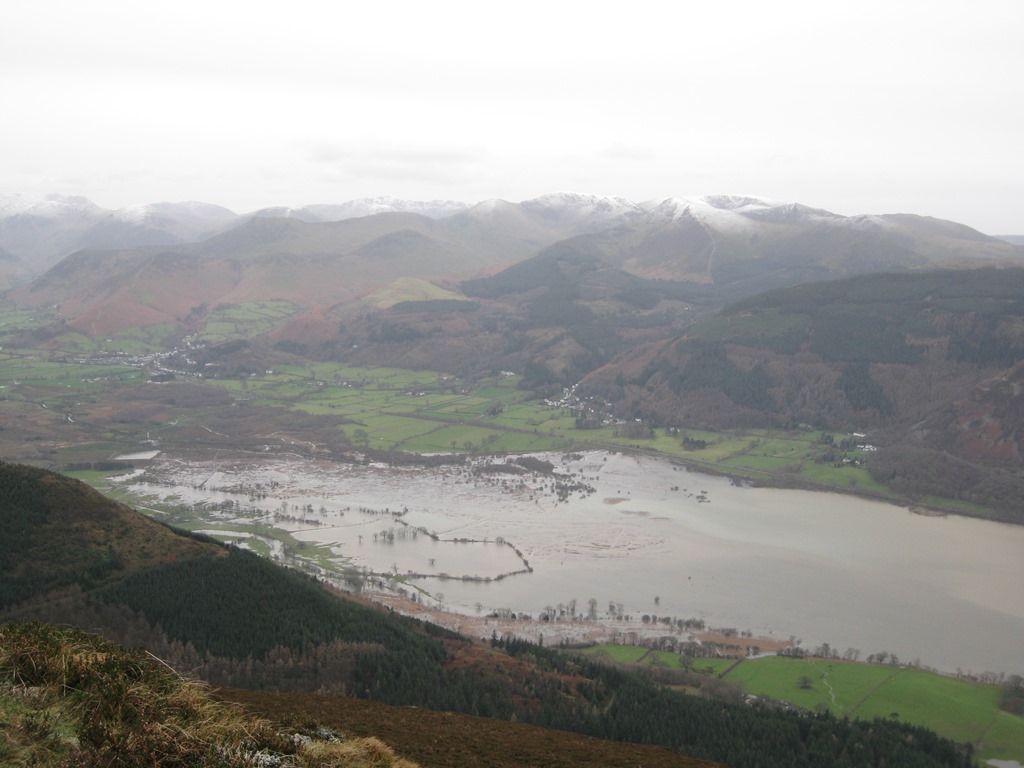 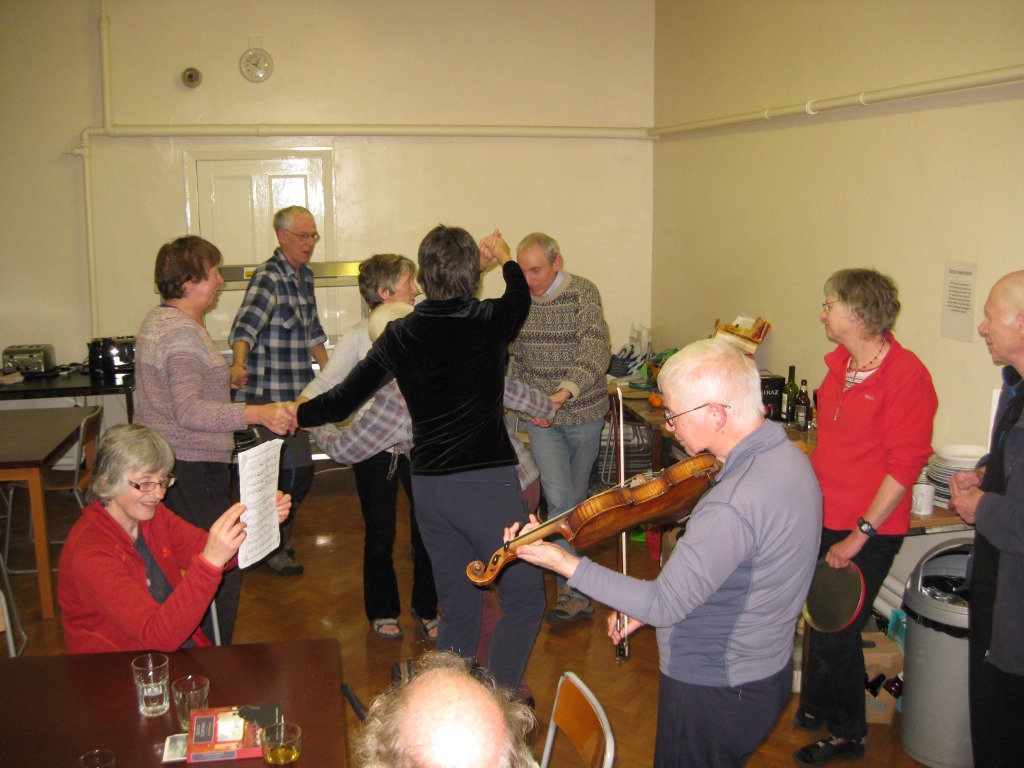 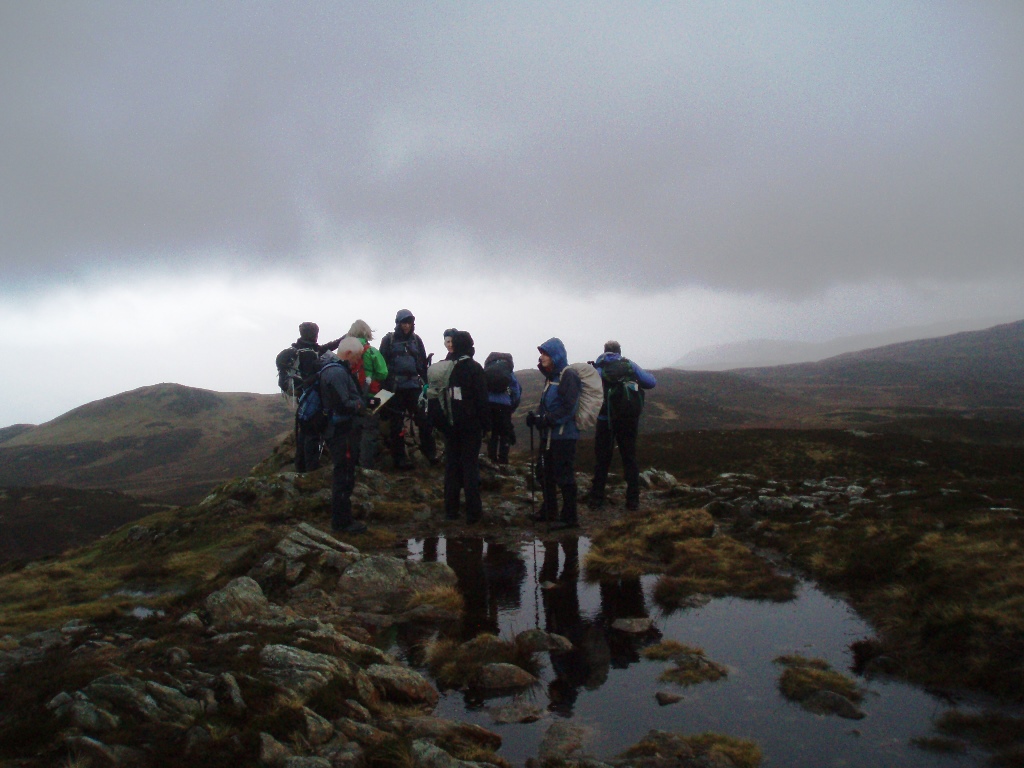 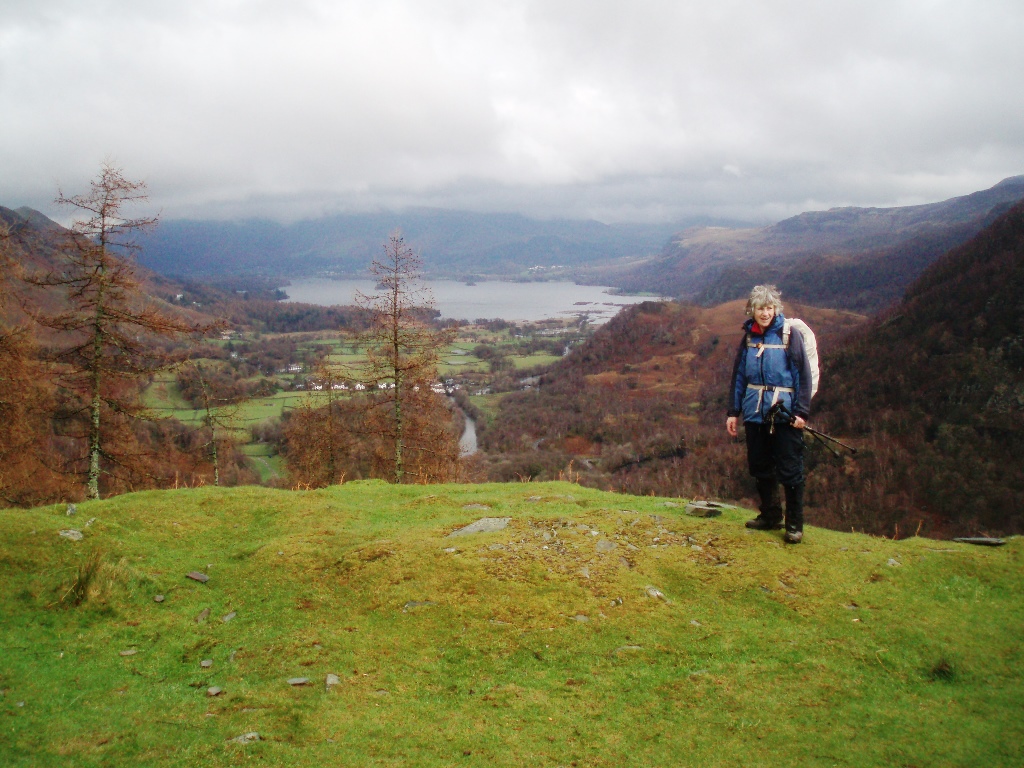 Report by Ann Dean of the Glenmore Club

This was an historic event in the annals of the Glenmore Club – the first time (and I hope not the last!) that we had joined forces with other clubs on a New Year meet. We enjoyed the company of 10 members of the Castle club from Sheffield, and 3 members of the Perth Mountaineering club. Including Chris and Dave, who of course are also Castle members, there were 15 Glenmorons attending, with 1 relative and 1 friend.

We were all a bit apprehensive after the recent floods in Keswick, and didn’t know in what state we would find the town and the Denton House hostel. The hostel, although near the river, had not been flooded, and the town was recovering, although piles of debris outside affected houses and along the course of the river showed how high the water had come and how devastating the flood had been. It was good to see that Keswick was very busy with visitors, and there was even a market in the high street.

The hostel was very well situated, being just a few minute’s walk from the centre of town. It was an odd building, having a long corridor from one end to the other, with rooms leading off seemingly at random. I don’t know what it can have been used for before its hostel days. There were 2 kitchens, both well away from the dining room, one for hostellers, one for the warden, neither of which were well equipped for small parties cooking for themselves. However Caroline organised her troops very well, and we had a communal meal the first night, pies and pudding bought in the second, and most people explored the culinary delights of Keswick the last night. The dining room was large and had a good springy floor for dancing. The dorms were a bit cramped, with nowhere except under the bunk to store anything, but my bed anyway was very comfortable, and the showers were hot!

Everyone got on together very well, and the Castle club and the Perth club entered into the Glenmore traditions wholeheartedly, although I did hear mutterings from one person when we changed places at the communal meal after every course! There were the usual Scottish country dances, with everyone taking part, and also some English and Irish dances for variety. We were treated to some lively Irish step dancing from Mary Cox and Noelle Ryan who spontaneously took to the floor to show us how it should be done. Chris tried valiantly to teach us her Carpark Reel, with the usual results. Some people were so taken with this dance, that they plied Chris with questions in forensic detail. Even at breakfast the next day they were quizzing her, as they wanted to bamboozle some friends by showing them how to do it.

I almost forgot to mention the hillwalking! Most people decided to climb Skiddaw on New Year’s day, although high winds meant that not everyone got to the top. David Foster went up Binsey, and Henry and Kathleen pioneered High Seat and Bleaberry Fell. Roger, Ann and Louise circumnavigated Derwentwater trying to keep out of floodwater, and Alan Dean went a cycle from the hostel taking in Hardknott, Wrynose and Newlands passes. Next day, most people reprised Henry and Kathleen’s Bleaberry Fell, although going the other way round. This unfortunately gave rise to an ear worm for some, and strains of Fats Domino’s Blueberry Hill resounded for a while. Mary Cox , Elizabeth Maitland and Louise did Watch Hill by Cockermouth, David went up Lord’s Seat from Whinlatter, and a small select group consisting of Perfects and Deans went round Buttermere and had coffee and toasted teacakes to recover.