Four members met in Old Glossop in lovely sunny warm
weather. A nearby information board reminded us that the
village was the only Glossop until the 1840s when the
present day town was developed. Our aim was to do the
southern section of Stage 4 of the Peak District Boundary
Walk (PDBW).

We set off uphill, soon arriving at Swineshaw Reservoir, the
first of about 6 passed during the walk. Braving fast
motorbikes while crossing a road, and a wonky stile, we
arrived at the quaint village of Padfield. We headed down
Padfield Main Road before passing through a turnstile and
dropping down to Bottoms Reservoir at the end of
Longdendale. The map and description in the PDBW book
differed here and we wrongly followed the route shown on the
map, resulting in an unnecessary quarter-mile diversion.

While crossing the dam and the River Etherow we
noticed an interesting circular structure below the dam
which an interpretation board informed us was a fountain
used to regulate the water in the reservoir (not in use as
the water level was quite low). A path and lane took us to
the busy Woodhead Road which we crossed to reach the village
of Tintwistle. We reached Arnfield Farm and ascended beneath
a line of electricity pylons to reach open moorland. Time
for a coffee break.

Farther on we crossed Ogden Brook on a stone bridge. This is
where an variation of the Stage 4 route heads over the
moors. Still near the line of pylons, and having been joined
by the Pennine Bridleway (PBW), we crossed the dam of Higher
Swineshaw Reservoir. The PBW left us again while the
Boundary Walk pressed on up the hill at the crest where, at
344m asl, we had a new view over Mossley, a town on the
eastern edge of Greater Manchester. A good spot for lunch,
relaxing on the carpet of grass and heather in the warm
sunshine. We pondered our options. The originally planned
ascent of Harridge Pike seemed unappealing. We considered
splitting the party, with two completing the stage to Dove
Stone Reservoir and the other two returning for a car. Our
taxi expert also suggested all of us going to the end and
hoping to get a taxi back to Old Glossop. In the end we
decided not to split the party.

Continuing ahead on the track overlooking the settlement of
Carrbrook, we descended to again reach the Pennine
Bridleway. We had completed 6.4 miles of Stage 4 (nearly
two thirds) leaving 3.8 miles to be done at a future date.
We now circumnavigated Harridge Pike through Brushes,
following the Bridleway back to Upper Swineshaw Reservoir. A
little farther on we encountered a woman with two horses
who had stopped for a coffee break (the woman, not the
horses). She was doing the whole of the Pennine Bridleway
(205 miles from Middleton-by-Wirksworth, Derbyshire to
Ravenstonedale, Cumbria). One horse was for her and the
other for her baggage.

We now walked back along our outward route, enjoying the
views in the reverse direction. A tea break was taken above
Bottoms Reservoir, and we enjoyed a welcome drink at the
Bull’s Head pub after arriving back in Old Glossop. 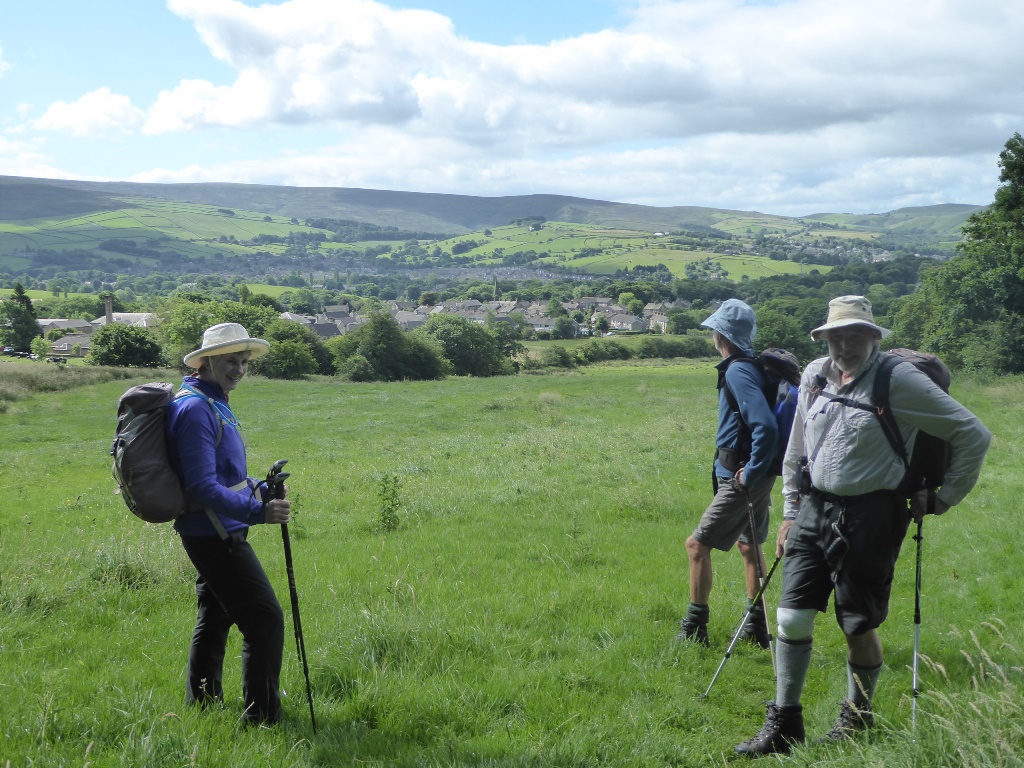 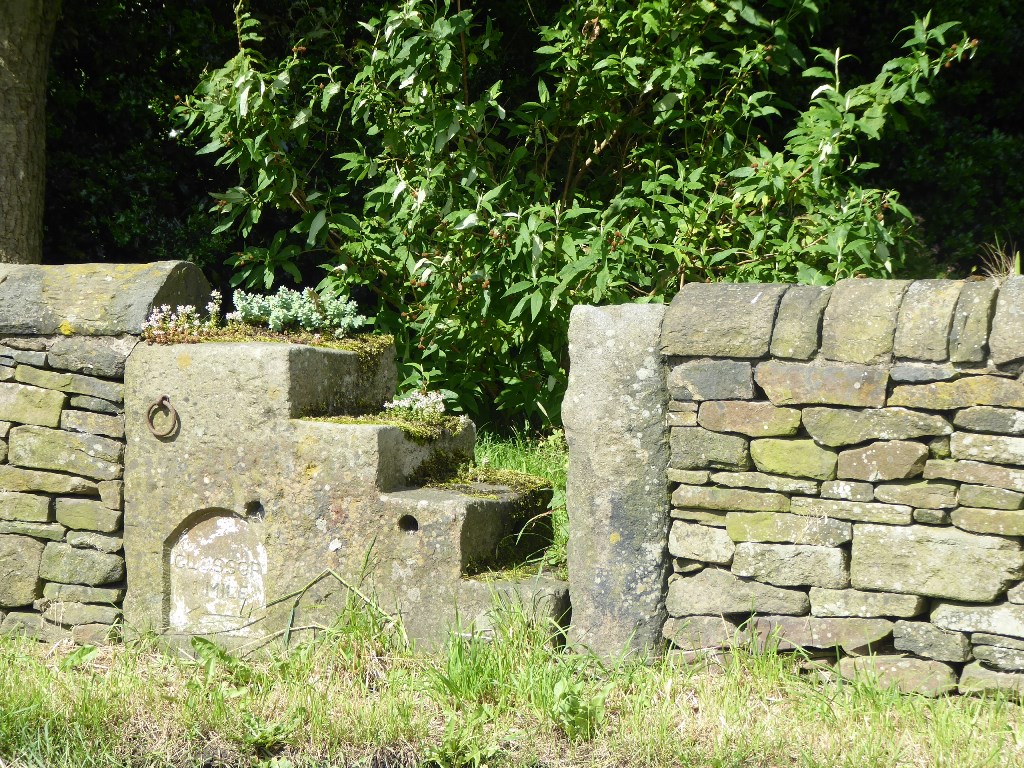 One mile from Glossop. Photo: Vanda 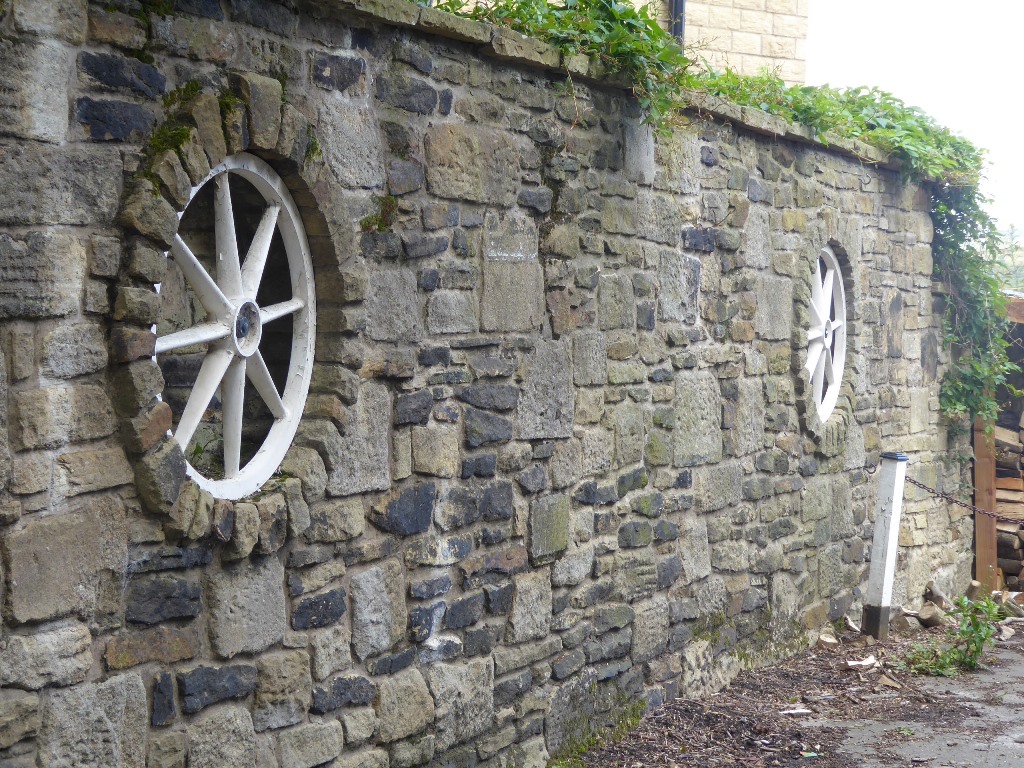 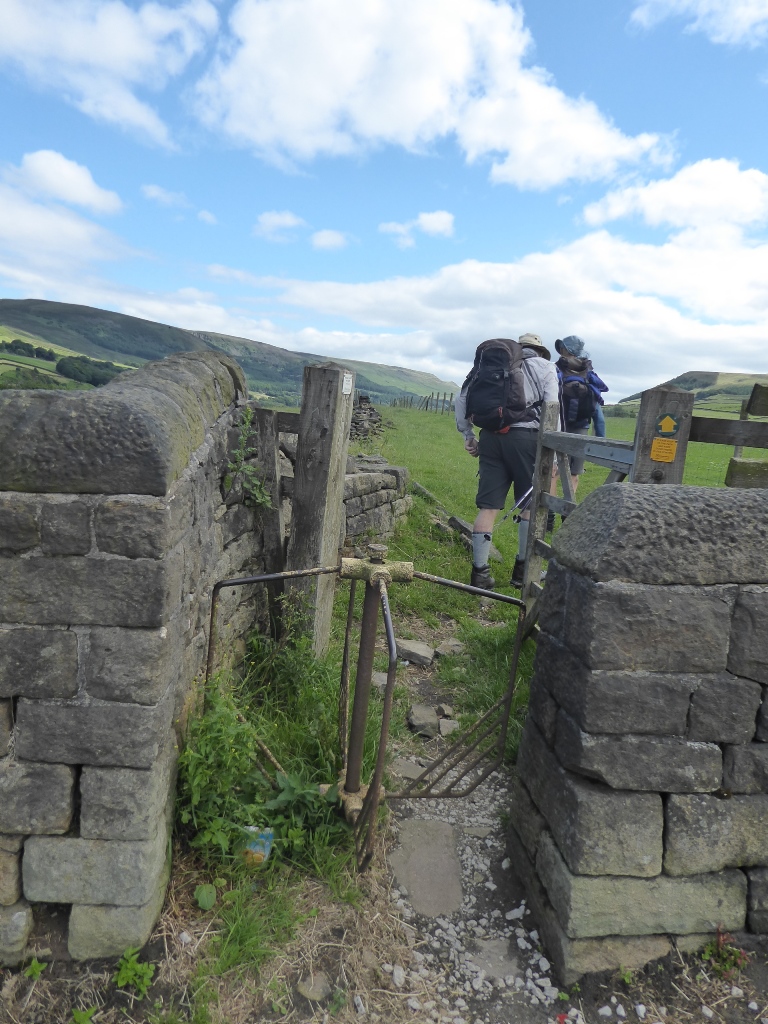 Through the turnstile. Photo: Vanda 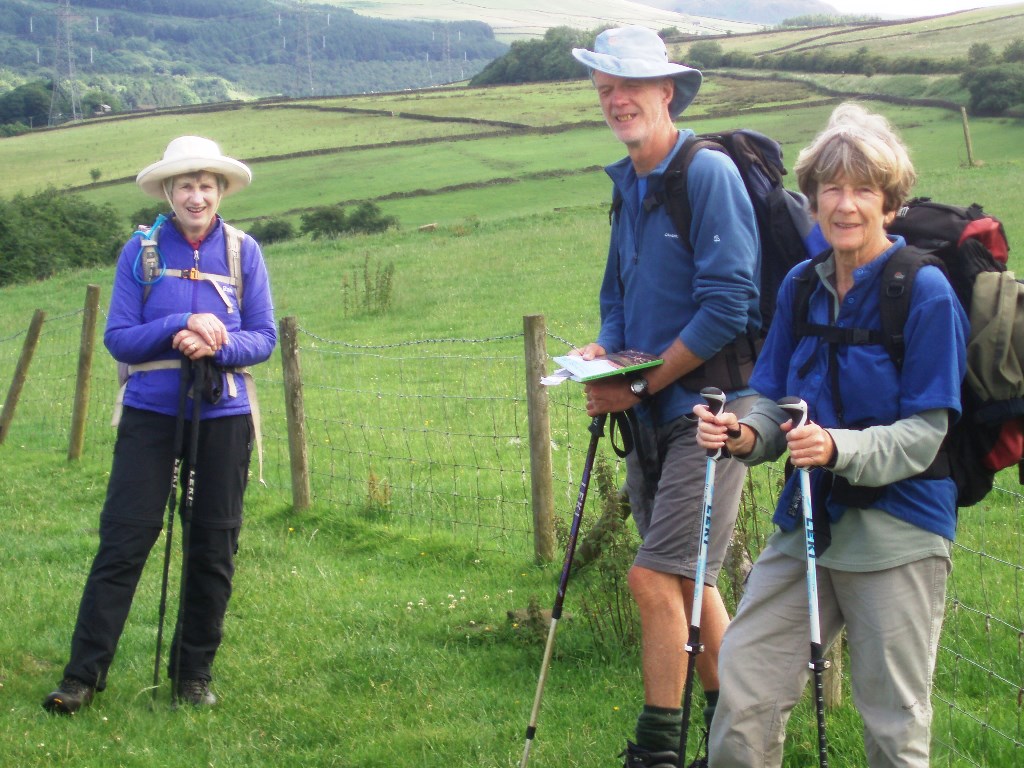 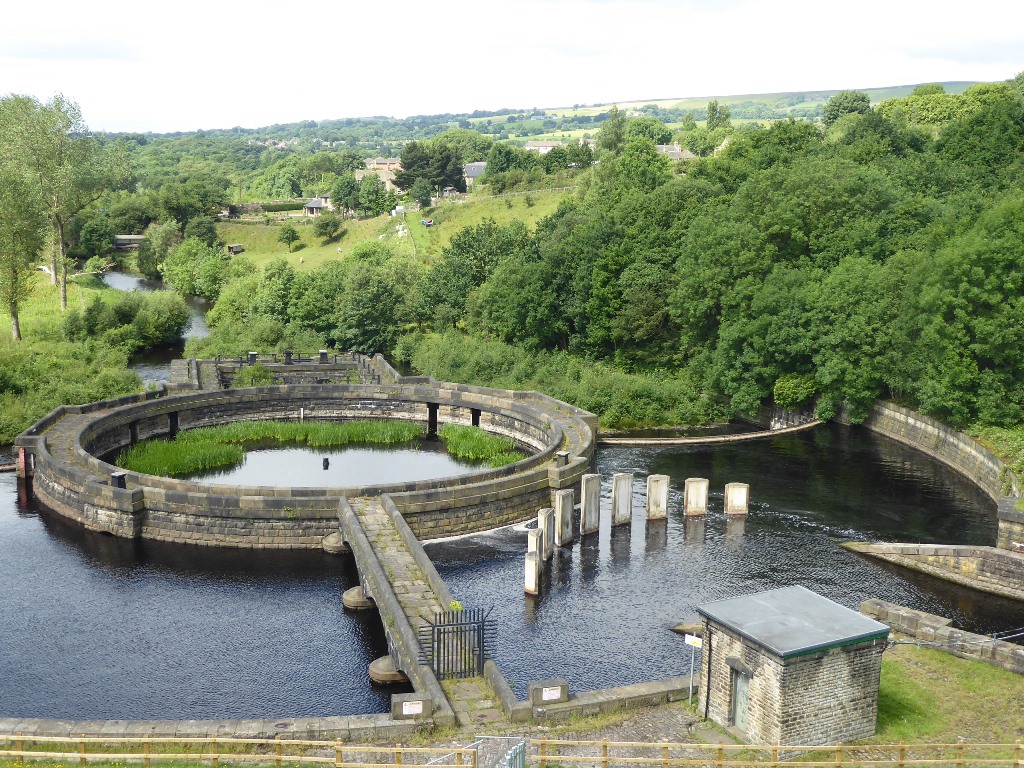 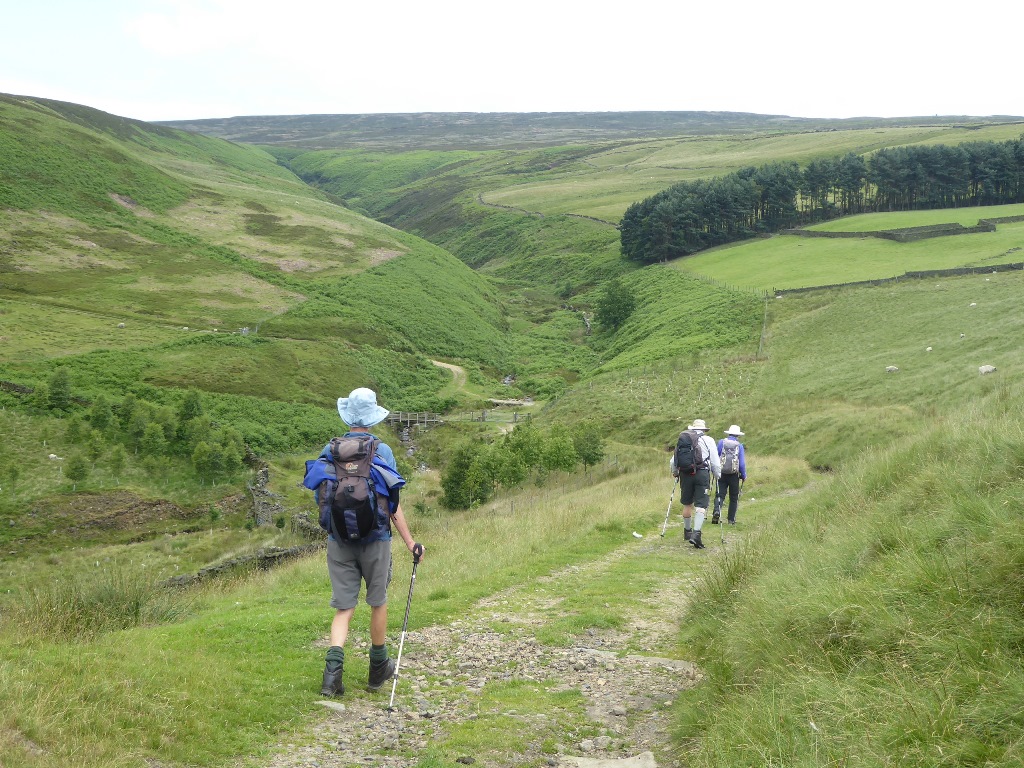 Down to Ogden Clough. Photo: Vanda 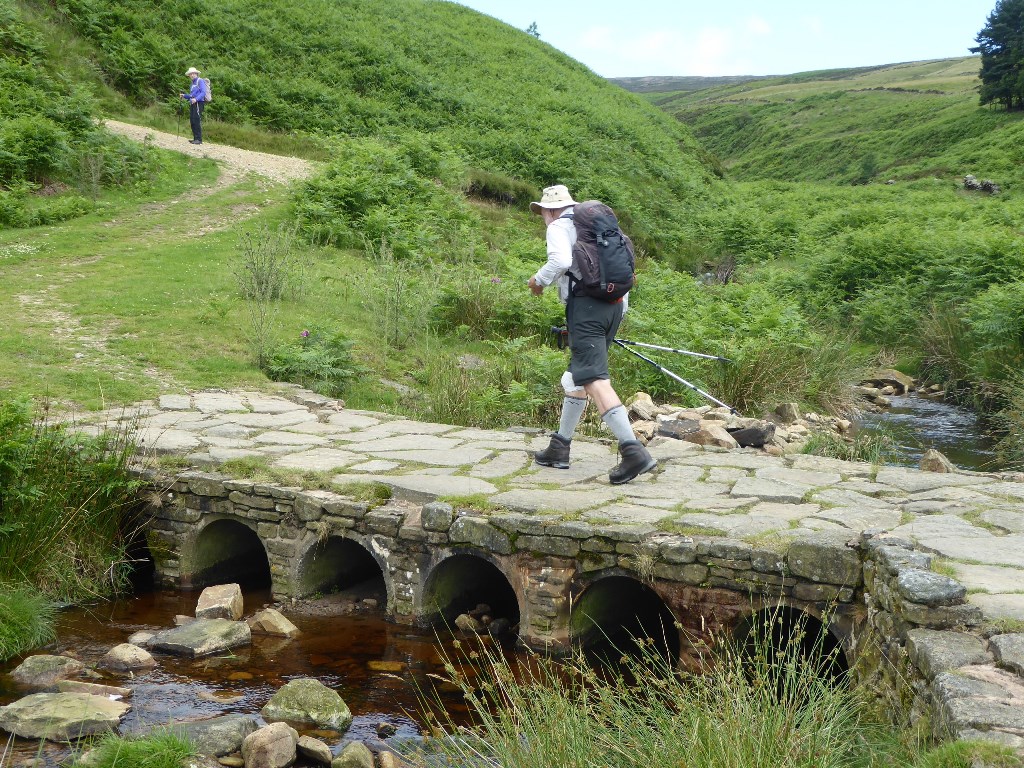 Across the clough and up the other side. Photo: Vanda 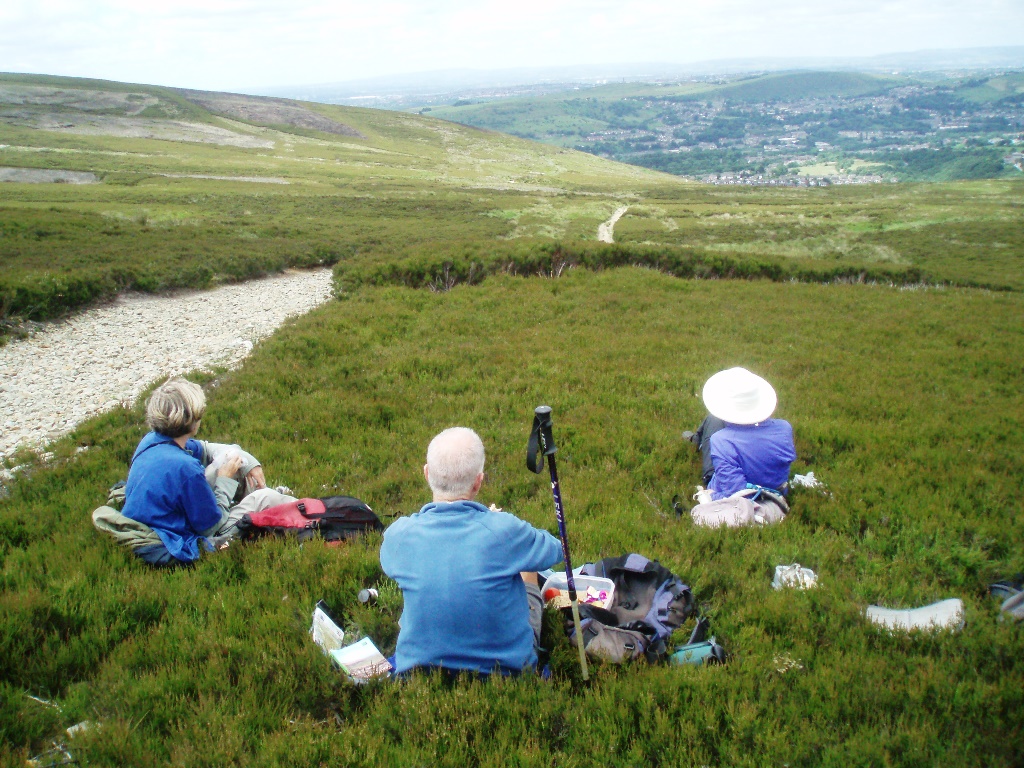 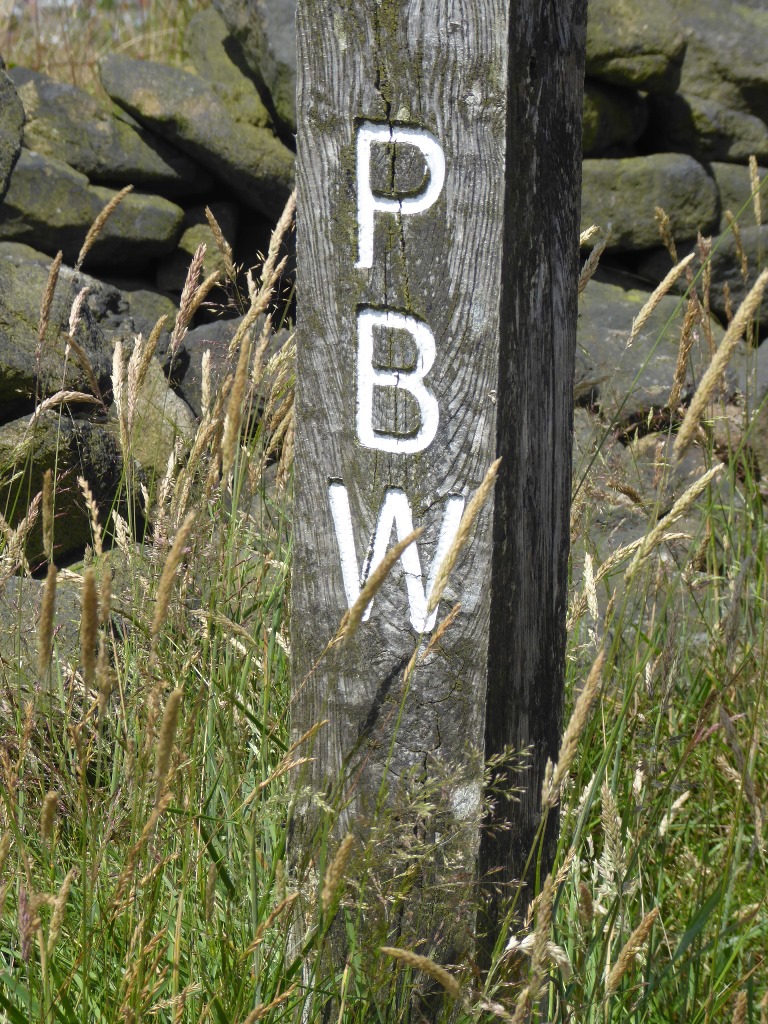 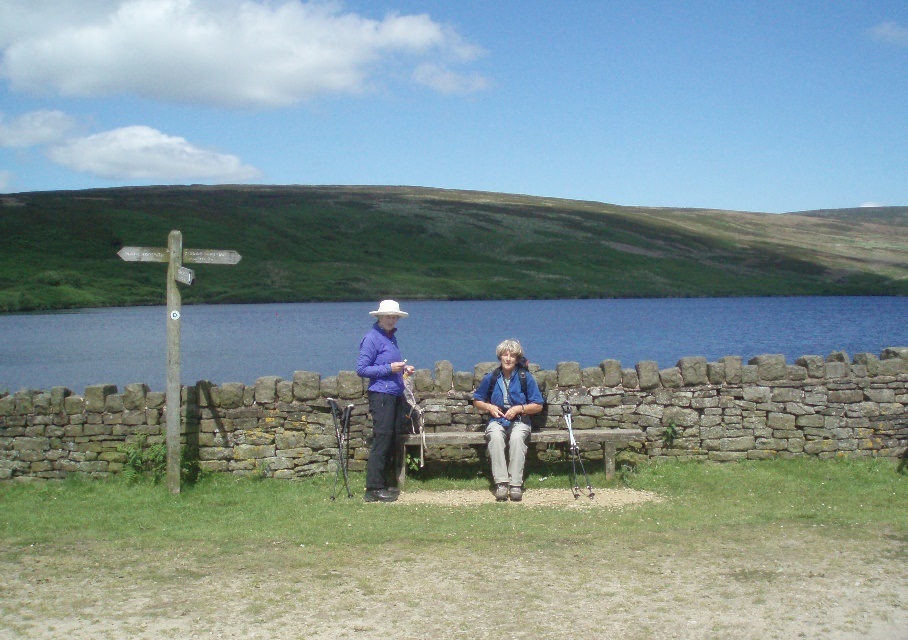 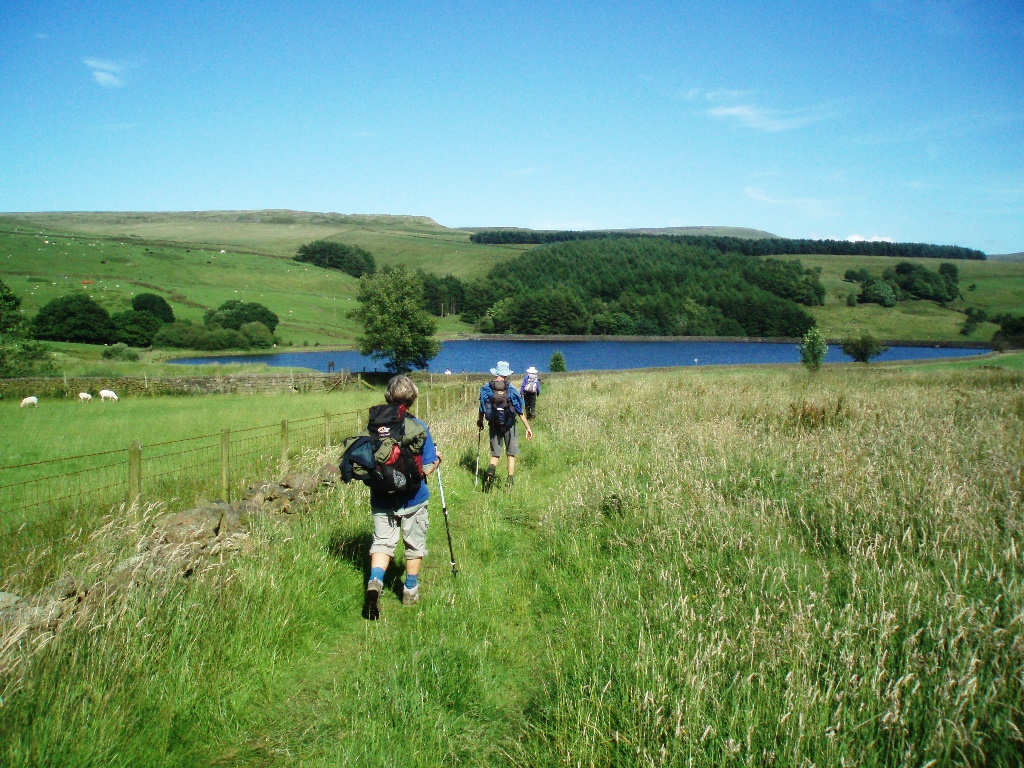 On the last leg. Photo: Andy