Eight club members, 3 others and 4 dogs met on a cool but sunny sunday morning. We ascended to Rushup Edge via the Chapel Gate track and picked up the penine bridleway to South Head. We met Frank at South Head as he completed the route in reverse, reaching South Head by Jacobs ladder. Couple of stops for coffee and lunch en route and we stopped to admire the great views towards Manchester and Hayfield on such a clear, if windy day, where group photo was taken by Tim ( see attached).
All agreed to skirt the southern edge of Kinder rather than descend to Upper Booth via Jacobs Ladder . We followed the path to Grindslow Knoll and followed the nice but steep descent back to Upper Booth. Chris noted that we had clocked 12.9 miles.
Lovely Walk and great company. Thanks to Sean for such a good route.
Fiona 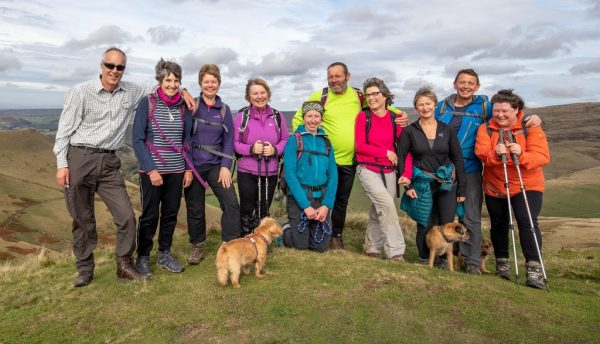