The weather forecast was far from promising as twenty two people, including two members spouses and a great grand daughter and two dogs met up at Marsden Train Station car park. After sorting out two groups, the A team went off for the 10.00 sailing through the tunnel and my group the B team headed onto the moors over Pule Hill. Happily the torrential rain that was promised did not materialise just the odd shower. We had a dead line to meet, we were catching the one O’Clock boat back through the tunnel from Diggle back to Marsden, so we were keeping a good pace and there was the added incentive of a cafe. On reaching the tunnel end we meet Charles who doing the boat trip back. As we walked along the canal path to the cafe, as if on cue the boat carrying the A team emerged from the tunnel and we all met up at the cafe

The tunnel is approximately three and a half miles long and the trip takes two hours in the electric powered boat. Considering it was dug over 200 years ago using pick, shovel and gun powder and basic measuring equipment it is an impressive piece of civil engineering. The tunnel is not much wider than the boat and the roof is quit low so it is not for the claustrophobic, there are railway tunnels ether side of it with connecting passage ways. The guide was very interesting answering all our questions and pointing out all the features and telling us the history. The two hours flew by. I would just like to thank Mary who did a recon walk with me and guided the A team. 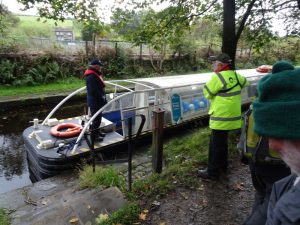 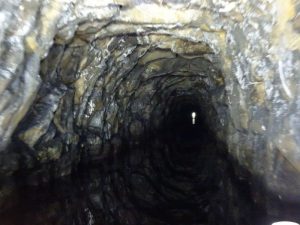