Beeley to Ringinglow walk report for 9/8/18

Equipt with new OS app on phone, and having plotted the Boundary Walk section, at the first possible junction that Sean politely pointed at, I ignored this and the phone . After 100m , decided to look at phone and little arrow off route and we all turned round and got on route.
I booked the weather, and moderate temperatures helped the 9 keenies. First break of many up at Hob Hurst house above Chatsworth, admiring the purple heather. All had triple rations, but on reaching Milnthorpe 3 of us easily squeezed in some artisan icecream. On to the second stage, up and up reversing some of the down down irritatingly, we made it up to the moor scenery again. Another blip on the route discussed at another break, and a knowledgable Mary, and we headed up without going off route to our high point on Houndkirk moor. Could see smoke billowing from the Leek area, which turns out to be a wild fire at the Roaches. Also could see across to the Hallamshire hospital and gave John a big wave. We had send him some of Andrews one liner jokes earlier. And got a joke in return.
All very pleased to start romping, stomping and stumbling on the final mile to the pub. Well done to all, some who were particularly chuffed . Andy was there already waving a pint. 21 miles and 930m of ascent and 50350 paces!! The latter a record for my 3 month old app.
16 for the meal was a great way to finish off the day. Thanks to all for a good day out and putting up with my gadget enthusiasm. Linda. 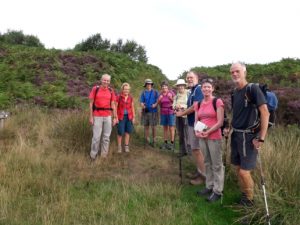 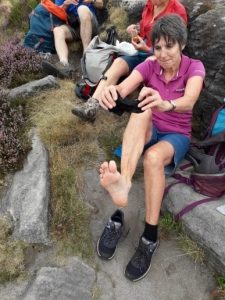 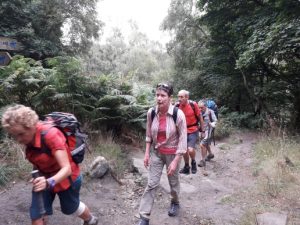 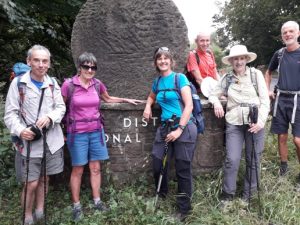 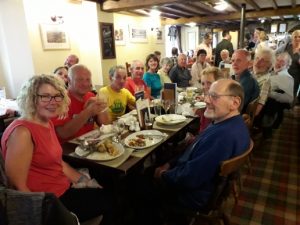