Those of an observant nature will have noticed an early post this morning re this meet, from The Organiser. This seriously disturbed a number of members still in bed at the time. Despite dire warnings from the Met Office, a grand total of 8 members and one welcome newcomer, Janet, felt obliged to answer the summons, flooding towards the crag in waves.
Remarkably the crag was still dry as we assembled before 10am and frantic rushing about led to a number of ascents, even during the course of a heavy shower.
The Organiser, expecting more rain, even took to hanging upside down and wimpering under an overhang before eventually emerging to finish in the dry.
However, by 12.30 a more serious downfall led a retreat after a remarkable number of ascents given the short time available. As CMC tradition demands, it was full speed to Hathersage and the Citronella Tea rooms [Outside was full], before serious gear shopping resulted in many pounds being spent and shares in Paramo rising as a result.
As usual, The Organiser delegated her task of writing this report to the most gullible member present, which turned out to be yours truly.
Thanks Linda!!! 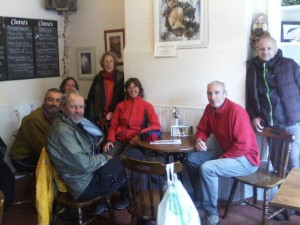