Despite a horrendous weather forecast, 8 of us convened at the side of Ladybower by 9.30, after cunningly depositing a couple of cars at strategic points along the Snake Road. Setting off via Crookhill Farm we gradually made our way up towards Alport Castles, with a rising wind, but thankfully only brief bursts of the promised rain. On ascending out of the track to Hagg Farm, the open moorland saw us battling quite a violent wind, so much so that Vanda attached herself to Geoff to prevent being blown sideways. She claimed a combined total of approx 20 stones was just right. She later attached herself to most of the men in the party, some things never change.
We had hoped to have elevenses in the birdwatching hut at Alport, but it’s no longer there, so we were forced to shelter behind the remnants of a dry [!!] stone wall a bit further on. Those of us sitting with our backs to the wall had the eerie sensation of feeling the wall move, such was the strength of the wind.
On emerging from the end of the wall, the wind appeared to have got even stronger, but we decided to move away from the edge and make our way to the trig point midway to Bleaklow. We subsequently arrived [see picture], but by this time there were a few revolting natives who wished to remove themselves from the buffeting and not go to Bleaklow. We decided to drop into Alport Dale where the party split into two. The chief revoltee led her party down Alport Dale to the car left at the bottom and returned safely by 2.40, approx 9 miles.
The rest of us then traversed into the upper reaches of Alport Dale, well above the river but nicely sheltered from the wind at first. However, the further up we got, the more the wind was funneled down on to us, hail for a short time, resulting in one broken pole [cost £4.99], a slowing of progress and aching joints. Eventually we reached the top of the valley, but rather than heading for the ridge, we turned towards the west and made our down to the Snake Road, hopping over in to Lady Clough Plantation and a return to the top car by 3.35.
12.2 miles of the finest Dark Peak bog-hopping in challenging conditions, but all returned safe, if slightly battered, with dry coats, before dark.
Some of us later joined Martin & Pat in Wetherspoons for an evening meal before they set of to the Canaries to celebrate Pat’s big birthday. 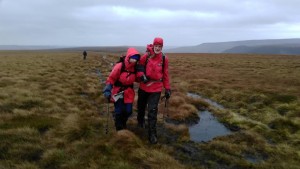 Fun in the Snow

Members were out in force in the Peak District in January following the arrival of snow.

On Tuesday 22 January, Mark Procter and David Pendlebury bagged an early 2013 ascent of Kinder Downfall. This ascent made the national press due to some great images from freelance photographer Rod Kirkpatrick.

Linda McLeish led a snowy walk in the area of Dale Dyke Reservoir for the Thursday walking group. This was followed by a very well attended ‘Moonlight Walk’ organised by Paul Gibson. Moonlight was in short supply but reflection off the snow meant headtorches were unnecessary and a circuit of the Burbage Valley was made before well-deserved refreshment was taken in The Fox House.

On Friday, Tom Corker and David Pendlebury made an early start to climb Wildboar Clough on Bleaklow. Sporting rock and ice pitches were found before an early return to beat the forecast snowfall. Tom is co-author of ‘Scrambles in the Dark Peak’ published by Cicerone.