How to turn one day into 3!
Five of us arrived on Friday at the campsite and were treated to an excellent sunset and for some a lovely warm wood stove, courtesy of Gemma & Kial.
The weather for Sunday looked a bit ropey so the Castle Challenge was extended to the Saturday. An excellent sunny climbing day, the five campers were joined by five other members and one dog. The CMC challenge list of 30 climbs on the Upper & Lower Roaches was presented and many took part. Some friendly competition followed with most members opting to climb on the Upper roaches. Many new routes were climbed and repeats for some, though not since the 1980’s! As the day lengthened, scores were totted up, with the most climbs being 8 by one pair. This pair shall not be named at risk of the competition being considered rigged. We didn’t make the overall challenge to climb all 30 routes as a club, though we managed to squeeze in a lot of routes between us!
Sunday was a wet start as anticipated so an alternative walk. Several members had colds at varying stages so opted for home, or a shorter walk en route leaving four (one vaguely healthy!) to complete the total 13.5 mile round from the campsite. The route took us north from the campsite, through farmers’ fields, farmyards (both deliberately and accidentally!) and alongside a wide array of animals. An old working piano took Geoff’s interest though sadly no concerto. Shortly after the meet leader was escorted out of a field by a rather intimidating sheep. Following an eventful morning we made it to Upper Hulme where a trip to the tearoom was in order. Refuelled we made our way alongside Tittesworth reservoir before looping into the outskirts of Leek and the gradual climb back up the ridge to the campsite.
Monday saw us climbing again, with 4 members joining for the day. Most climbed at the Upper & Lower roaches on various routes. A small group split off to boulder in the afternoon. A very sociable time with some delicate and bold moves on the boulders.
Thanks all for a great weekend! Photos to be added to the Facebook page. Matthew.
Gemma’s photos: 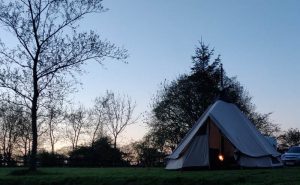 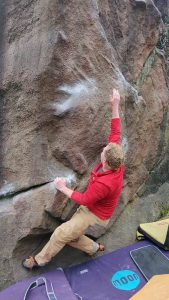