15 people and Poppy assembled after parking at opposite ends of the lane. It was good to see John back from his long spell of hospitalization and enforced rest.
It was a pleasant morning, warmer than many anticipated and with increasing spells of autumnal sunshine.
After crossing the road without casualty we crossed the bridge over the Noe and turned left towards its confluence with the Derwent. Leaving the riverside we struck up to the lane leading across to Offerton Hall. A coffee break was enjoyed before a stiff pull through the bracken to arrive on Offerton Moor. The pleasant path lead across the moor to Shatton Lane which was followed round to the stone bench at the the top of Brough Lane where we had lunch. There was much discussion on topics ranging from fungi (edible and inedible) to smartphone abuse and from bluecaps to bluetooth.These and other topics of international importance had still not been exhausted when it was time to move on. Passing and photographing a face built in the stonewall we descended Brough Lane and turned right past Elmore Hill Farm and thence (archaic) to Shatton.
Some of the party then enjoyed tea at the garden centre cafe and one enjoyed chocolate cake.
Thanks to all who came along.
Frank & Jennifer

Vanda’s photo of the wall face: 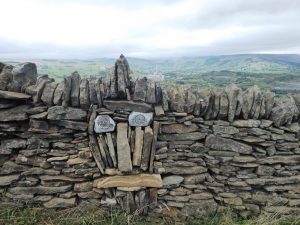