All posts in Uncategorized

Linda, Pat, Martin and I could not make the Chatsworth walk so we arranged an alternative of our own. We left the parking above the Polop Paradise urbanisation at 10.30am as we did not think anyone else would join us. Crossing a stream bed, we followed a rough track uphill through scattered woodland. After a brief stop for a drink the terrain steepened significantly. Progress was steady and height gain significant. Linda complained about the missing tea break due to no flask being brought. We had to move in single file as the route was narrow until we gained less steep ground. Here, Martin noted that it was almost one o’clock so we had a break for a drink and snack under a lonely pine tree. The wind was cool so we soon traversed acreoss the side of the mountain and scrambled downwards to steeper ground. Pat questioned whether abseiling was allowed in ‘the rules’ for Thursday walks, but as we had no choice two abseils brought us back down to easier ground and the path back to the parking area. A select group but a great day out with no sign of rain or snow.
David

The report refers to an ascent of the via ferrata, which follows the obvious arete on the right hand side of the main face. The Ponoch is inland from Benidorm, Costa Blanca, Spain. 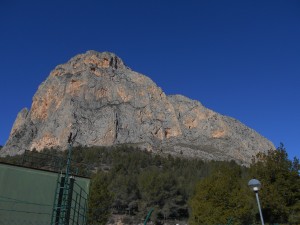 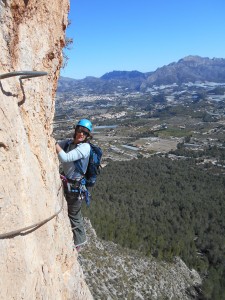 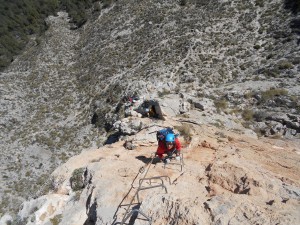 Twenty-five club members and two guests went to the Llangollen Hostel for the 2014 annual dinner meet. This was a new venue for the club and despite being a bit snug in terms of the sitting and dining rooms proved to be a very comfortable venue.
Llangollen is surrounded by great countryside packed with outstanding views and, with the canal and Pontcysyllte and Chirk aqueducts, steeped in well preserved industrial history that are well worth visiting. On the Saturday (a cold but clear day) members variously walked, biked and ran round the surrounding hills and valleys (and aqueducts!).
Back at the hostel club members and guests were lucky enough to have Marian once again in charge of the catering. Some members set to supporting Marian by preparing vegetables while in the spirit of too many cooks spoil … others felt it only right to support local breweries and nipped out for aperitifs. All were back for 7.15 and sat down to an outstanding three course meal. The meal was followed by David delivering the club president’s annual awards ceremony to club members who had an exceptional achievement during 2014 or had in a couple of cases bounced back from injury and surgery to carry on enjoying outdoor activities. Later Gordon provided great live entertaiment.
It was more of the same on the Sunday with 14 members walking in the Worlds End area and three members enjoying some navigation challenges as they ran around the local mountains (possibly due to the speed they were going?).

Personal highlights were the cycle along the ‘Panorama’ road that follows the Eglwyseg valley – a quiet road with stunning views and the walk to Castell Dinas Bran a ruined castle that sits above the town on a relatively small hill in a big setting. And then of course there was the meal …
Thanks to all for coming and playing a part in a great weekend. Now where should we go next year … 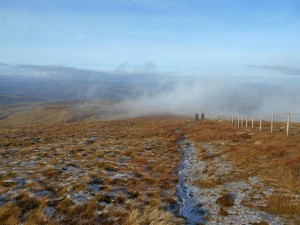 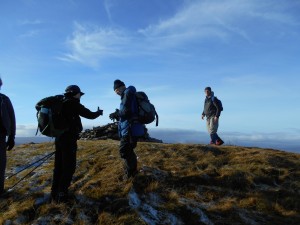 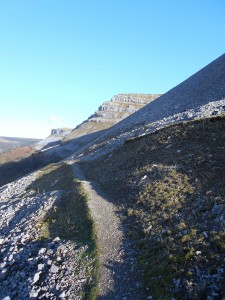 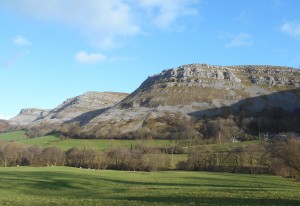 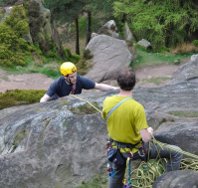 Sheffield’s Castle Mountaineering Club is holding an open climbing weekend on the 12 and 13 May, providing the opportunity to find out more about the Club and meet some of its members. The weekend will focus on rock climbing on the Peak District’s glorious gritstone.

Have you spent all winter down at the wall and want to move outdoors, are you an experienced climber looking for a climbing partner or do you want to find out more about what rock climbing involves? This weekend provides the opportunity to meet fellow climbers of a range of abilities and ages. We plan to climb at Stanage (Popular End) on Saturday and Burbage North on Sunday, starting at 10.30 am on both days. However, it might be raining, meaning a change of venue, so contact us in advance.

Find out more about the Castle and meet some of its members. There will be a choice of climbing, walking and mountain biking together with a Saturday night social event.Hopefully, each activity will run on both Saturday and Sunday, so that you can do a different event each day. We aim to tailor each day to the level of experience of those taking part, so please register your interest early. Contact Andrew (0114 268 6605) for more details